This is the third post in my inquiry project. Read the first and second posts to catch up.

As I thought about how to bring multiple perspectives to my students, I knew children's literature would give me what I needed.  In search of Mirrors, Windows, and Sliding Glass Doors (Bishop, 1990), I  turned to blogs and websites like We Need Diverse Books, Reading While White, and  A Year of Reading written by Mary Lee Hahn and Franki Sibberson.
I became purposeful in finding children's literature that represented the stories of those who have been marginalized in our White dominant society.  Reading literature with characters that represent many different communities allows students to gain a deeper understanding of those who are different from them, gaining insight not only into their differences, but also their similarities.  I wanted to give my students of color the opportunity to see themselves in the books they read, to feel valued. At the same time, I wanted my White students to see stories and worlds different from their own.  Dr. Rudine Sims Bishop reminds us in Reflections of the Development of African American Children's Literature (2012), "all children have the right to books that reflect their own images and books that open less familiar worlds to them" (p. 5).

This summer, I reached out on Twitter asking for book suggestions. 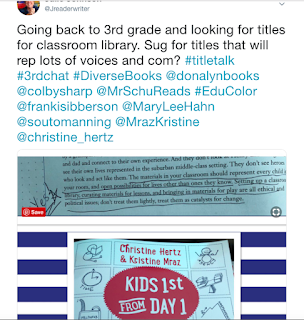 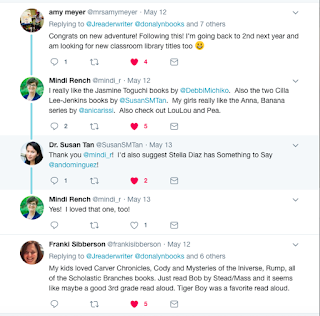 I got introduced to some great characters and new authors.

Dyamonde Daniel (series of 3 books) by Nikki Grimes is about a plucky third grader whose parents are divorced.  She is the new kid at school and she faces challenges head on.  All of my students saw themselves in this book in one way or another. 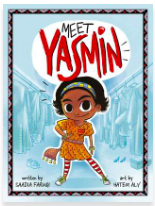 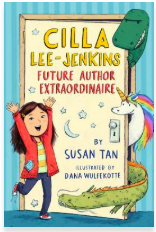 Cilla Lee-Jenkins (by Susan Tan) is half Chinese and half White.  She's another character full of spunk.

The Carver Chronicles series by Karen English is another great series about kids at Carver Elementary.  They are funny and yet deal with some serious issues.

Stella Diaz by Angela Dominguez is based on the author's experiences growing up Mexican-American.
These characters, among others, have become favorites in my classroom.  We have waiting lists for certain books and I've even had a few complaints that some aren't reading fast enough!  This Padlet has more ideas for book and video ideas.  I can already tell that I need to create a Padlet just for book and video titles.

When choosing books, I keep several things in mind:
1.  Is the book by an author who either shares an identity with the characters in the story or has done research on the culture or community they've written about?  (#ownvoice author)
2.  Do the diverse characters take an important role in the story or are they secondary characters?
3.  Are the characters portrayed as sharing the commonalities of being a kid?  (See 28 More Black Picture Books that aren't about Boycotts, Buses, or Basketball 2018)
4.  Do the books I choose portray other diversity besides race?

My third graders have been exploring books as mirrors and windows the last few weeks and I'm excited about the work they are doing.  More to come in future posts.
Labels: Anti-bias education Books Inquiry Mirrors Windows Sliding Glass Doors Reflections Teacher Inquiry