Growing up we didn't like each other very much.  Our mom said that someday we'd be friends.  We didn't believe her.

We had some horrendous fights...hair pulling, scratching, screaming at the top of our lungs.  I remember the time we were grabbing at each other after school because one of us had something the other wanted and my glasses went flying off my face only to break as they hit the floor.  Mom had just started a new job to help make ends meet and I had just gotten those glasses.  We both knew there was going to be a price to pay when our parents got home and neither one of us was going to admit any guilt.  I'm pretty sure both of us had to empty out our scrawny bank accounts to put toward a new pair of glasses for me.

She taunted me.
I bossed her.
She complained about me.
I made up rules and made her follow them because that's what big sisters do.

I didn't think there was anyone I could like any less, unless it was my youngest sister who caused me as much angst as my middle sister did.

We grew up.
And we found that the other wasn't so bad after all.

Now that we live 1,000 miles apart, we don't get to see each other very often.  So when we do, it's time that cannot be wasted.  We laugh, we hang out, we read, we eat good food.   We talk about what it's like to have grown up kids.  We still feel like we're 30 ourselves.  We remember the times we had to stand up for each other or be there to hold on tight when the other one was falling apart.  We think about what the future holds for us as we are now considered middle aged by our younger, hipper children.   How did that happen?

She no longer taunts me,
And I try not to boss her, although sometimes I slip.
I like to think of it as good advice.  (If I didn't tell her to pinch off the basil so it would fill out again, who would?)


We no longer hate the sight of each other.  And is always the case, Mom was right.

We are sisters who are also friends. 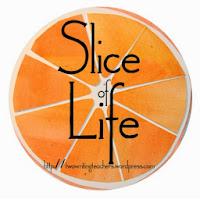 Thank you to Two Writing Teachers for hosting Slice of Life Tuesday.  I invite you to go to their site to read other Slice of Life stories.
Labels: Family Stories Sisters Slice of Life Story